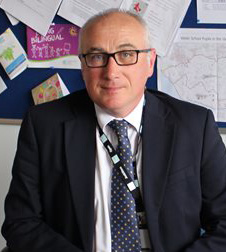 Dr Vince Browne has been appointed as Executive Headteacher for the two new mixed sex secondary schools that will be established in Barry next year.

Currently headteacher at Llantwit Major Comprehensive School and Executive Headteacher at Llanishen High School in Cardiff, Dr Browne will now take on responsibility for all aspects of both new schools’ strategic management as well as pupils’ results.

Dr Browne, said: “It goes without saying that I am absolutely delighted to take on this new role, and with it the challenge establishing two new first class secondary schools for Barry.

“These will be two separate schools with distinct identities and my first priority will be to ensure the two work together to make the transition from the old set-up to the new as smooth as possible for both pupils and parents.”

The new schools will begin to operate from September 2018.A brand new building will replace the current Barry Comprehensive School while the building currently housing Bryn Hafren Comprehensive School will be completely overhauled as part of a construction programme that will provide both new schools with state of the art facilities.
In a joint statement Antonia Forte and Carole Tyley, chairs of the two temporary governing bodies, said: “We are delighted to announce that Dr Vince Browne has been appointed to the position of Executive Head Teacher to the two new schools being created in Barry.
“Dr Browne was the standout candidate in a high-caliber field and the experience he brings from his previous executive headteacher role will prove invaluable as we work together to establish the new schools.”
A head of school will now be appointed for each of the two schools, which will replace the current single-sex Barry and Bryn Hafren comprehensive schools that will be dissolved at the end of the 2017/18 academic year.
These teachers will be responsible for the day to day management of their appointed schools.

Cllr Bob Penrose, Cabinet Member for Learning and Culture, said: “This is a project of huge importance and it is essential that the £44m being invested in education in Barry brings the greatest possible benefit to the town.

“The appointment of Dr Browne means that the transformation of secondary schooling in Wales’ largest town will be managed by one of the most capable leaders in the sector. I look forward to working closely with Dr Browne over the coming months.”
Paula Ham Director of Learning and Skills said: “Dr Vince Browne has a proven track record of working closely with the Council to raise standards of achievement. He has achieved excellent results at Llantwit Major Comprehensive School. I couldn’t have hoped for a better figure head for the new schools.”